Future of Information Technology and its implications to the Pharmaceutical Industry (September, 1995)

Seventeen years ago while lecturing on Karl Marx in Bombay University I predicted that communism, as a political system will not even last my lifetime.Talking about the impact of Information Technology on the future of the Pharmaceutical industry, I am forced to make some predictions.
According to R. Buckminster Fuller, humans on this planet have two primary functions:
1) To gather Information.
2) To solve problems.
These two fundamental functions have been pivotal to the evolution of every culture.

The advent of computers in the 50's brought about a major transformation in the speed with which massive amounts of data could be analysed. The marriage of information with technology was a natural progression in this evolution. Since this event, information technology has been transforming our knowledge base at an unprecedented rate. It is almost impossible not to come in contact with information technology in our day to day life, e.g. banking, credit cards, air travel etc.

“Future of Information Technology is linked to The Internet”

What started as a need to protect strategic data being destroyed in case of war has progressed into a powerful platform for permanent peace on this planet. This was the beginning of Internet. The American vision of Super Highways and the desire to share information with the rest of the world resulted in the “net” being opened to anyone who chooses to join in.

What is the Internet?

When you connect into the Internet you have the potential to communicate with every other individual on the net. There are approximately 30-50 million users on the net.

Figure 1. Future projections of number of users on the Internet cumulative (in millions) 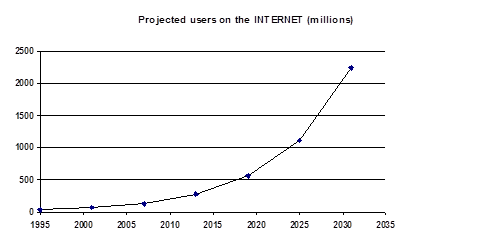 Commercial use of the Net

Although commercial advertising to all groups on the net is against the Netiquette there is nothing against commercial transactions being carried out through the net. It is almost certain that a proportion of buying and selling in the future will be structured through the Internet.

The future transactions (Post-Fibreoptics)
Exchange of information at a rate of 300 Mbps. Real time videos, animation and graphics. Virtual reality will become the next biggest agent of change on the Internet. With virtual reality one could test drive a car, provide clinical consultation or even perform surgery.

Characteristics of Internet consumer:
• In-tune with computer and the Internet.
• Make decisions on the strength of information.
• Demand the best service and will be “destructive“ in expressing dissatisfaction.

There would be a natural tendency to move into the insurance business which would be linked to lifestyle.

Scientific Reason as to why the commercial world is set to take this direction?

Avogadro's Law: A generalised Principle.
Under the same conditions of temperature and pressure, equal number of molecules of all gases will occupy the same amount of space. This is cosmic democracy in the physical world.
All humans on this planet irrespective of their status, nationality, colour or religion are equal in one respect - the freedom to think, which can be described as democracy in the metaphysical world.

The Internet will create an environment which will allow citizens of the world to acquire any knowledge about themselves and the universe around them, to express opinions, have the freedom to think and act at global level, in a global sense and global terms.
Any attempts to control the freedom of the individuals are doomed for failure. Perhaps this would explain why Communism as an “experiment” failed in Russia and why the Berlin Wall had to come down.
The Internet is not simply a protocol but the foundation on which the future generations will construct the new global structures, exchange ideas, conduct business and shape the destiny of the unified world.

Companys choosing not to participate on the Internet would be committing a suicide.